If you or a loved one has been injured, reach out to an award-winning electric car battery attorney at Belluck & Fox today.

Manufacturers of electric vehicles and batteries for electric cars have acknowledged fires that have caused injury and need to be held accountable. 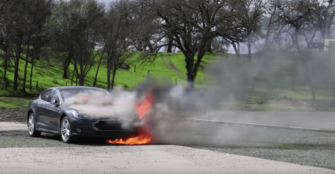 Electric car battery explosions are a new phenomenon because electric cars have recently become a popular option for drivers on the road.

Drivers have begun to report that fires in their vehicles have started under their back seat, where the battery is located.

Lithium battery lawsuits have been filed as a result of these fires – not unlike those caused by batteries in laptops, cell phones, and other electronics, but at a much larger scale.

Why are electric car batteries dangerous? Can a car battery explode?

Electric car batteries can explode or set on fire just like other lithium batteries. They can pose a danger in an accident, but also while parked or charging. As automakers work to improve efficiency and give drivers more mileage, risk of these fires can increase with denser batteries.

What vehicles are affected by electric car battery fires?

Electric automobiles manufactured by Tesla, Chevrolet (including the Chevy Bolt), Ford (including the Ford Escape), Hyundai, and BMW have all been cited with car battery fire infractions.

How many electric cars start on fire?

While a handful of electric cars have caught fire, hundreds of thousands of electric vehicles on the road use batteries that are at risk. This number will increase as demand for electric automobiles rises, and technology advances.

How long does it take for an electric car battery to decompose?

According to Consumer Reports, electric car batteries last for 17 years on average with 12,000 miles of usage per year. What should I do next?

Those who have been injured or lost a loved one because of an electric car battery fire should reach out to Belluck & Fox attorneys immediately for a free consultation on your legal options.

Why should I choose Belluck & Fox?

Belluck & Fox is a nationally recognized law firm that fights for its clients and their families as if they were our own. We don’t just know the law, in many cases we helped to write it. When you work with us, you start your journey with one of our firm’s Partners, and have regular access to them or one of our experienced attorneys throughout the entire process. We have secured over $1 billion in verdicts and settlements holding corporations accountable.