Areas We Serve in Rochester At Belluck & Fox, our top-rated Rochester mesothelioma lawyers have more than two decades of experience securing maximum compensation for those who have been seriously hurt due to the negligence of others. Our highly respected trial attorneys have fought and won against large corporations and insurance companies, forcing them to pay more than $1 billion to our deserving clients.

From our law office in Rochester, we serve clients across the Finger Lakes Region, often traveling to meet with individuals and families who are too hurt or ill to come to our office.

Contact us today to set up a free consultation with our team.

Brighton is a town in Monroe County, on the south side of Rochester. At its core is the Twelve Corners, a central entertainment and commercial district. The area got its name from the 12 corners formed by the intersection of three roads: Winton Road, Monroe Avenue and Elmwood Avenue.

Brockport is a small village that is primarily located in the Town of Sweden in Monroe County, just west of Rochester. Known as “The Victorian Village on the Erie Canal,” Brockport boasts a Main Street, aka Route 19, that houses historical buildings and serves as a tourist destination. The Erie Canal runs right through the village.

Chili is a suburb of Rochester that was originally the hunting grounds for the Seneca Indians. The suburb features that The Chili Mills Conservation Area, which has been listed on the National Register of Historic Places. The Chili Center serves as the hub of the town and houses the town government buildings. Other notable places include the Chili Public Library and Roberts Wesleyan College.

Churchville is a village in Monroe County that is just west of Rochester. Located north of I-490 at the intersection of Routes 33 and 36, Churchville is named after early settler Samuel Church. Notable residents include Tim Redding, a former Major League Baseball pitcher; Jenn Suhr, an Olympic pole vaulter; and Renée Fleming, an opera performer. East Rochester is located southeast of Rochester in Monroe County. Originally known as the Village of Despatch, it changed its name to East Rochester to highlight the community’s proximity to Rochester. The area includes three state highways: NY 31F (Fairport Road), New York State Route 153 (Washington Street) and New York State Route 940U (West Commercial Street). One of East Rochester’s claims to fame is that it is the smallest community to ever win a Little League or Senior Little League World Championship.

Fairport is a village within the Town of Perinton in Monroe County, about nine miles east of Rochester. Known as the “Crown Jewel of the Erie Canal,” Fairport boasts a wide range of activities along the waterfront. Residents and visitors alike gather at the Fairport Village Landing and Packett’s Landing local hot spots, and the Colonial Belle tour boat offers fun canal cruises.

Gates is a town in northwest Monroe County, about seven miles from Rochester. The town hosts the headquarters of Wegmans Food Markets. The National Register of Historic Places lists The Franklin Hinchey House as a local landmark.

Greece is just northwest of Rochester, with Lake Ontario to the north. It is in the northern portion of Monroe County. The National Register of Historic Places lists Greece Memorial Hall, The William Payne House, William Covert Cobblestone Farmhouse, and Our Mother of Sorrows Roman Catholic Church Complex as local landmarks. Hamlin is the second-largest town (in area) in Monroe County. It was named after Abraham Lincoln’s first vice president, Hannibal Hamlin. The northern boundary of the town is Lake Ontario, and the Lake Ontario State Parkway crosses through the north section of Hamlin.

Henrietta is a suburb of Rochester and a town in Monroe County. The town is home to the Rochester Institute of Technology, as well as Marketplace Mall, one of the biggest shopping districts in the county. The National Register of Historic Places has designated The Andrew Short House, Tinker Cobblestone Farmstead, and Antoinette Louisa Brown Blackwell Childhood Home as local treasures.

Hilton is a village within the town of Parma in Monroe County. The village is known for its apple-growing heritage and celebrates this every fall by holding a two-day Apple Festival. Hilton is also home to one of the largest corn mazes in the country (20 acres of maze), run by Zarpentine Farms.

Honeoye Falls is a village in the Monroe County town of Mendon. It is named for the small waterfall along Honeoye Creek that flows through the village. The National Register of Historic Places has recognized the Honeoye Falls Village Historic District, St. John’s Episcopal Church, Totiakton Site, the Lower Mill and the United States Post Office in Honeoye Falls as local treasures. Irondequoit is a main suburb just north and east of Rochester city limits. The town is bordered on three sides by water: the Genesee River on the west, Irondequoit Bay on the east and Lake Ontario on the north. Some of the area’s local attractions include Seabreeze Amusement Park and Durand-Eastman Park.

Macedon is a town in Wayne County, located east of Rochester and west of Syracuse. It is named for Macedonia, the famed birthplace of Alexander the Great. The National Register of Historic Places has listed the J. and E. Baker Cobblestone Farmstead and Charles Bullis House as local landmarks, and the town itself is part of the Erie Canalway National Heritage Corridor.
Mendon is known as the most affluent suburb of Rochester. The town is home to Mendon Ponds Park, a 2,462-acre property that is the largest park in Monroe County. The park has been designated a National Natural Landmark.

Ogden is a town about 12 miles west of Rochester in Monroe County. The town contains Adams Basin, an unincorporated hamlet, and the village of Spencerport. The Erie Canal also runs through the town.

Parma is a town about 15 miles outside Rochester in Monroe County. It was named after Parma, Italy. The town is bordered on the north by Lake Ontario.

Penfield is suburb of Rochester in Monroe County. With the motto “A Town of Planned Progress,” Penfield is known for its plethora of parks and major employers such as Birds Eye Foods, Nalge Nunc International, Paychex and Wegmans. 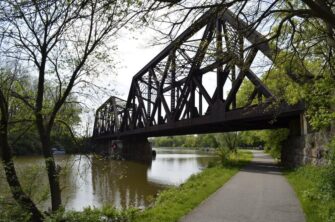 Pittsford is a town about eight miles outside of Rochester in Monroe County. It is nationally recognized for its Greenprint Plan to preserve open space. The town is also home to two colleges (St. John Fisher College and Nazareth College), two large malls (Eastview Mall and The Marketplace Mall), five country clubs and 11 town parks. It regularly attracts professional golf tournaments and hosts the Buffalo Bills summer training camp.

Riga is a town southwest of Rochester on the western border of Monroe County. The National Register of Historic Places lists The Riga Academy as a local treasure.

Rush is a town about 15 miles south of Rochester in the southern portion of Monroe County. Speculation is that the town was named after either Founding Father Dr. Benjamin Rush or the rushes along the creek. Preserving the local railroad heritage, the Rochester & Genesee Valley Railroad Museum connects via rail to the nearby New York Museum of Transportation. Spencerport is a village within the Town of Ogden in Monroe County, located along the Erie Canal. Sites of interest in the area include Pineway Ponds Park, Springdale Farm and Colby-Pulver House Museum.

Victor is a town southeast of Rochester in the northwest corner of Ontario County. It is located 12 miles from the head of Canandaigua Lake. The National Register of Historic Places notes that local treasures include Boughton Hill, Cobblestone Railroad Pumphouse, Felt Cobblestone General Store, the Jeremiah Cronkite House, Osborne House and Valentown Hall.

Webster is a town in northeastern Monroe County that is bordered on the north by Lake Ontario and on the west by Irondequoit Bay. With the town motto of “Where Life Is Worth Living,” Webster boasts many beautiful outdoor spaces and family-friendly activities, including the 550-acre Webster Park, two lighted stadiums, a hockey and soccer complex, an indoor track, and an Olympic-size indoor pool.